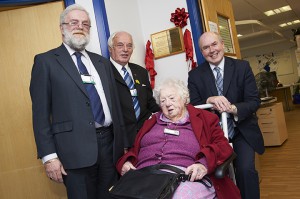 A very special 100-year-old Solihull woman who has dedicated much of her life to her hometown hospital was on hand to officially open a new clinical area which has been named in her honour.

Millie Skinner has volunteered at the Lode Lane site ever since the Friends of Solihull Hospital (FOSH) was founded 61 years ago and has helped the group raise over £1 million in that time. She still attends monthly committee meetings despite turning 100 in October and is as passionate as ever about Solihull Hospital and healthcare in the town.

The Millie Skinner Transfer Hub, based on Ward 10, aims to improve care for complex patients by supporting their pathway through the hospital and signals an exciting opportunity to proactively manage patients’ ongoing health and social care needs from within Solihull Hospital.

Today Millie was joined by family, friends from FOSH and senior managers at Solihull Hospital to officially open the hub and unveiled a plaque dedicating it in her name to mark her 100th year and in honour of her tireless and continued dedication to the hospital.

Dr Rex J Polson, associate medical director at Solihull Hospital, part of the Heart of England NHS Foundation Trust, spoke at the ceremony and said he was delighted to honour Millie’s ‘massive contribution’ to the hospital for so many years.

He said: “As a hospital we were so keen to honour Millie in some way in this, her 100th year, to show our appreciation for all the work she has done for Solihull Hospital both through her work as a nurse on the old hospital site and for the FOSH group which has made a huge difference over the years.

“Millie has always been committed to supporting the work the hospital does for its community and it is fantastic that this new area, which is already making a really positive difference to our patients’ care pathways, will carry her name.”

Millie’s daughter Joan Lowery said her mother was ‘immensely proud’ to have been given the honour by the hospital that she has supported all her life.

She said: “It was a wonderful gesture for the hospital to dedicate the transfer hub to my mother and when she was told she was really proud and honoured. She has always had a strong affiliation with the hospital and even at 100 she is as keen as ever to know what is going on at the hospital and support staff and patients in any way she can.”

Millie started working at the hospital site when it was still the Workhouse, before the war in 1939 meant it became an emergency hospital and she began working there as a nurse. In 1953 Millie’s brother founded FOSH and Millie has been a committee member ever since.

2015 is just around the corner and it is almost that time of year again where after much Christmas indulgence, people will be making New Year’s resolutions.

One of the most common resolutions made is to lose weight. Did you know being overweight can lead to health conditions such as heart disease, type 2 diabetes and stroke? Making sensible changes to your levels of physical activity as well as your diet will make a difference.  Losing weight will not happen overnight and it will take time.

Drastic fad diets and exercise regimes that result in rapid weight loss are unlikely to work for long since these types of lifestyle changes are difficult to maintain.

So what can be done to lose weight? Sally Abbott, dietician at Solihull Hospital, says: “The healthy body mass index (BMI) is a measure of whether you have a healthy weight for your height. If your BMI falls into the overweight range, aim to achieve a weight that puts your weight in the healthy range. If your weight is in the obese division, set yourself a target of losing between five to ten percent of your starting weight. Click here to check your BMI.

“Find ways of increasing your levels of physical activity. Try to get off the bus one stop early on the way home and walk the rest of the way. During your lunch break you could even take a walk to the shops. You do not have to spend several hours at the gym and being regularly active can help you to maintain weight loss. The right amount of physical activity depends on your age. It is recommended that adults between 19 and 64 get at least 150 minutes of moderate physical activity every week.

“Asians tend to add butter/ghee to improve the taste of Asian dishes. As an alternative, you could use rapeseed oil. Rather than having a heavy meal in the evening, it is better to have smaller meals throughout the day.

“Cutting down on foods that are high in saturated fat and sugar such as cakes, biscuits, pastries and pies can make a difference. Try to eat less salt as well. Reducing the amount of alcohol you drink will allow you to control your weight.

“Aim to eat at least five portions of fruit and vegetables each day. A glass of 100 percent unsweetened fruit juice counts as one portion. Why not try chopping various fruits over your breakfast cereal? Go easy on the carbohydrates such as bread, pasta and rice and keep an eye on your portion sizes.

If you are worried about your weight, contact your local GP or talk to a dietician for advice. You can also visit the NHS Choices website (www.nhs.uk) for more advice on how to lose weight.

Does the trust issue nutritional information to parents whose babies have feeding problems – ie problems eating lumpy foods – and/or whose babies struggle to gain weight? What is this information?

Yes the trust does provide nutritional information to parents whose babies have feeding problems . For those having problems with lumps please see attached diet sheets(Ideas for food which are thin, smooth and do not contain lumps and ideas for foods which are soft/ mashed containing soft lumps.)

and for those struggling to gain weight we also use

Does the trust advise different foods in lists described as “bite and dissolve”, “bite and squash/suck” and “easy chew food suggestions”? What foods appear on these lists?

These diet sheets are used in a specific group of children , following a dietetic assessment and tailored to the individual patient.

Thin smooth do not contain any lumps

You asked: I would be grateful if you could provide the number of visitors to Heartlands Hospital A&E for each calendar year for 2007 until the year to date and provide a figure representing the average waiting time for patients for each of those years. Data not available prior to 2008 due to implementation of new IT system

(i) the number of pregnant women attending an 8-week (or thereabouts) ‘booking in’ appointment at the Trust during each of the last five years from 2010/11 to 2014/15 inclusive; See below

(ii) the number of pregnant women attending an 8-week ‘booking in’ appointment during each of the last five years who were categorised as obese at that appointment; See below

(iii) please explain the Trust’s definition of ‘obese’ in this instance. Obesity is defined as those with a BMI greater than 35.

c) Yes, one campaign has been run targeting overseas nurses in 2013-14

Further overseas nurses may have applied directly to adverts on NHS Jobs and been successful, however we have no system in place to track these candidates.

3. Has the Trust held nurses recruitment fairs abroad in any of past three years?  No

4. If yes, please tell me in which country the fairs were held an‎d how many nurses were recruited.N/A

5. ‎Please tell me how much you spent recruiting nurses from abroad for each of the past three years either on recruitment fairs or other recruitment campaigns.

6. Please explain very clearly how you tested the English of the nurses before they were recruited. Was this through interview or written test and did staff from the hospital carry this out or was it left to an agency?  The agency spoke with candidates initially to access language skills and suitable candidates where then brought to the UK to complete a drug calculation test and be interviewed by Trust Managers.

A list of the number of times pest controllers were called out to hospitals in your NHS Trust for the following periods:

Could the list show the location to which the controllers were called out, the reason they were called and the date?

We responded:  Following the Government issuing new guidance on hospital car parking charges for staff, patients and visitors on 23rd August 2014, we have not increased any of our hourly or weekly prices.  We have increased the first 15 minutes of parking for free to 35 minutes, and we have also introduced a 20 exit carnet for £10 which isnow in place after a successful trial at Solihull, Good Hope and Heartlands Hospital. This is designed for all patients whose illness means that they have to attend hospital regularly.  This means visitors who purchase this card pay just 50 pence per visit, however long they park for.  This 20 visit card can be purchased on the signature of the ward so the concession is appropriately managed.

1. What is you agency spend per month on RMN’s , Camhs practitioners , CPN’s , Qualified Social Workers in separate form for the past 3 years including current year to date.

We do not hold this data in an accurately retrievable form.  I am aware that we employ a small number of RMNs but none of the other categories.

2. Provide me with name of the person who is in charge of your recruitment of agency staff in Camhs, Nursing and Qualified Social Workers for the individual departments.

3. Provide me a with a list of locations that the above practitioners would attend work with the full address and telephone number.

4. Provide a breakdown of agency spend per month for the past 3 years including current year to date including agency name and spend.

This would involve an invoice by invoice search which would exceed the 18 hour staff time limit according to section 12 of the FOI Act.

5. Provide me with the details of the maximum and minimum hourly charge rate for A) RMNs B) CPNs C) Camhs practitioners D) Qualified Social Workers

6. Provide me with information regarding whether applicable a A) PSL for agency B) A framework agreement C) Master vendor / Neutral vendor D) Tiering system

7. A list of management names and teams that each individual manages with location for all Nursing , Social Work and CAMHS teams.

8. If available a detailed list of pay and charge rates for agencies currently on Psl / framework / or spot purchases.

We are withholding this information as Commercially Sensitive under section 43 of the FOI Act.