Please provide the number of lifts in the Trust.

The number of lifts in the Trust is:

Would you be able to provide the following information in electronic format please (spreadsheet attached FOI 4825):

How many non-EU nationals treated in your NHS trust during each of the last four years were “chargeable” patients – ie those who should not have been receiving NHS care for free? Please give figures for each year

How much money has the trust recovered in charges from patients who were not eligible for free NHS care? Please give figures for each year

How much money has the trust NOT been able to recover in charges from patients who were not eligible for free NHS care? Please give figures for each year

Which departments were most frequently used by non-EU overseas patients (eg maternity/gynaecology)?

1. Please state the five longest delays (in days) which patients who were ready for discharge, have had before they were able to leave the hospital during the period 1st April 2014 to 31st September 2016.

2. Please state how many patients, who were ready for discharge, had to wait 28 days or more to leave the hospital.

Please break these figures down by the cause of the delay.

4)      Please state how much your trust spent on delayed discharges in each of the following financial years.

We do not hold this information as exact costings would depend on the treatment/ needs of the individual patient.  However we can tell you that a very general figure is used across the NHS of £250.00 per occupied bed per day.

5. i)          Have you had to open extra transitional, reablement or similar beds to meet the additional demand caused by delayed discharges?  Could we class the flex wards being open as partly because of the number of beds not available due to delayed transfers of care or due to medically fit patients waiting for their discharge plan to be confirmed?
No.

ii)           If yes, please state how many beds and the cost of providing these.
Not applicable.

Be a diabetes ‘X-PERT’ with an award-winning course 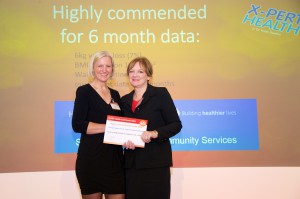 For the second year running the Solihull Community Diabetes Team is celebrating after being commended at a leading national industry awards ceremony.

The team, part of Heart of England NHS Foundation Trust, was recognised as having an ‘X-PERT’ Diabetes Patient Course by health education charity X-PERT Health at its annual awards ceremony at The Midlands Hotel in Manchester.

Paula Gallon, community diabetes dietitian, said: “If you find yourself confused or uncertain about the best way to manage your Type 2 diabetes, I cannot recommend this course highly enough. It is friendly and relaxed, giving participants a chance to learn how they can manage their diabetes, swap information and meet and chat with others in the same situation.”

The course has received some excellent recent feedback from its participants. Comments recorded include:

“I would not know what to do about managing diabetes if it was not for this course.”

“I thought the course was put across in a friendly informative manner and the many aspects of diabetes management were explained well.”

“I learned an awful lot and came away feeling really positive and happier.”

The six weekly sessions are held on Tuesdays and there are sessions in the morning, afternoon and evening through the year across Solihull Borough. Participants are welcome to bring a relative or friend with them and the course is free to attend.

Anyone with Type 2 diabetes and has a Solihull GP can book themselves onto the course. However, anyone taking Insulin should talk to their GP about being referred to the team’s Insulin X-PERT course.

For information about the courses, or to book, telephone the Solihull Community Diabetes Team on 0121 770 4432. 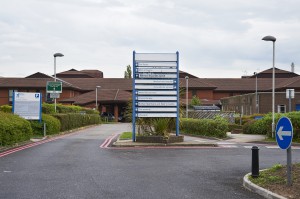 Solihull Hospital is continuing its journey to having a full Urgent Care Centre on site as it welcomes two new services.

Staff from the Walk-in Centre have transferred across to be a part of the new services, run by Birmingham and District General Practitioner Emergency Room group (Badger), and were welcomed by the Trust’s Minor Injuries Unit staff with a special meet and greet coffee morning.

The Booked Primary Care service will be for patients who have had an appointment booked for them, either via 111, their GP out-of-hours service or in some instances at the Urgent Primary Care service. For those patients who have been referred by 111 or their GP out-of-hours service, they will access this reception area from the north entrance of Solihull Hospital, opposite the visitor car park.

Signage will be in place around the hospital and grounds to direct people to the new locations. 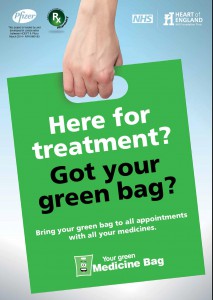 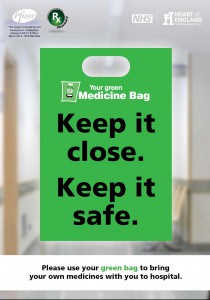 The green bag scheme was introduced regionally to encourage patients to bring their medicines with them when they come into hospital is now going to be rolled out to local GPs. Issued by the Trust’s emergency departments and admission areas and by the West Midlands Ambulance Service since April of this year, the bags stay with patients in the care setting and at discharge.

By patients bringing in the easily identifiable bags, this helps hospital staff to gain an accurate picture of what medicines they are taking and helps them to review that medication as part of their overall treatment. It also reduces the need to re-prescribe a medicine – reducing the potential for wastage.

If you require any further information about the green bag scheme, please contact joanne.lees@heartofengland.nhs.uk 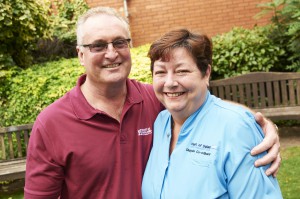 A popular member of staff has bid a fond farewell to the Birmingham hospital where he has worked for 36 years and where he met his future wife.

Colin Dyer has worked in a variety of roles in his time at Heartlands Hospital, part of Heart of England NHS Foundation Trust, from his beginnings working in Medical Records as a records porter to his role for the last 13 years as an information systems analyst in the IT department.

The 55-year-old has seen plenty of changes in his time and had many memorable moments, but none more so than when romance blossomed at a water cooler when he was introduced to his now wife of almost 10 years, Kathy.

Colin said: “We both worked in IT when we met, Kathy as an IT trainer. I hadn’t met her before but soon began flirting. I had to do a presentation and I asked her for some help and then I asked her for a meal. It went from there and three years later we were married.

“It turned out that we had actually lived down the road from each other in Stechford for years and had actually gone to the same junior and senior schools without realising.”

While Colin begins his retirement, Kathy will be continuing her current role as the renal dialysis coordinator at the Trust but she said she will make sure her husband has a long list of chores to keep him busy.

Colin added: “I am looking forward to what lies ahead and the list of work my wife has planned for around the house and in the garden. I am also going to be learning Spanish.

“It’s difficult saying goodbye to friends and colleagues who have made my job at Heartlands so very enjoyable over the past 36 years. I would like to thank them for their friendship, help and support over the years. I have shared some great experiences and had plenty of fun along the way.

“It has been a real pleasure and I am taking away many great memories of the time I have shared here.”

Colin’s last working day will be on Friday 28 October.