A new home for AEC at Solihull 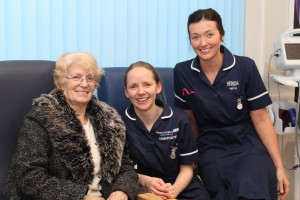 An initiative at Solihull Hospital which has reduced waiting times for some patient groups by half now has a new home to help drive even more improvements.

Ambulatory Emergency Care (AEC) is an NHS initiative to reduce waiting times for patients attending hospital with medical problems that aren’t acutely unwell. These patients often end up having long waiting times to see a doctor due to more unwell patients having to be seen ahead of them.

The system has been in place at Solihull since September 2015 but has been working from a small space within the hospital’s AMU department. However, it has now got its own home in the former discharge lounge at the main entrance and staff are delighted to finally have a space to call their own.

Lucy Hinds, group support manager for acute medicine at Solihull, told news@: “The AEC had previously been in what was literally an office space in the AMU and the waiting area in the AMU was taken up by patients waiting to go into this office – it wasn’t ideal.

“Taking over this space gives the team the opportunity to be even more effective and improve flow within the hospital and alleviate pressure on the wards, as it can also be used as a discharge lounge at quieter times.”

Senior sister Becky Jackson added: “It is really lovely to finally have a proper home – it is what we’ve been aspiring to from day one. It will be a nice environment for our patients and ease the pressure on AMU. I’m sure it will make a big difference.”

The AEC will be open in its new location initially until the end of March to cover the busy winter period and ease pressure on the ‘front door’.

For more information contact Lucy Hinds on 0121 42 44598 or email lucy.hinds@heartofengland.nhs.uk