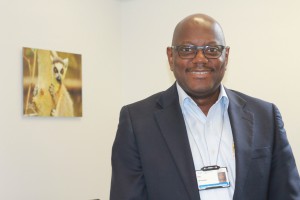 Adedeji (normally known as Deji) was born in Lagos in Nigeria, a picturesque coastal city and, at the time, the capital city of Nigeria. His family were middle class, his mum was a teacher and his dad worked for the civil service. He was one of five children, with three sisters and a brother. After completing his schooling and medical training and at the age of 28, Deji decided to relocate to the UK. As much as he enjoyed living in Lagos, he felt some limitations and he was keen to challenge his own limits and knowledge.

He arrived in London in 1991 with one suitcase to stay with friends. On arrival he got in touch with the GMC and the Royal College of Anaesthetists. They liked his CV but as they didn’t have any jobs, the College offered to be a referee for Deji instead. Two weeks later, a job came up in the British Medical Journal, which he applied for. The job was in Yorkshire at a small hospital in Dewsbury. The team were a small one, but very welcoming and friendly. Although there were very few black people in the area, the people of Yorkshire didn’t seem to notice or care.

During his 18 months at Dewsbury Hospital, Deji got married in Lagos and his wife joined him in the UK. An SHO job came up at a large hospital in Leeds and his team encouraged him to apply but told him that he probably wouldn’t get it as it was an open secret that the hospital didn’t employ anyone who wasn’t white and middle-class.

There were three jobs and five people were shortlisted for interview – Deji was the only black candidate interviewed and he was more than a little surprised when he was offered one of the jobs. He says the clinical experience working there was great, but the experience of being different wasn’t so great. It wasn’t overt, he was just made to feel like he didn’t quite belong. He stayed there for a year before moving to a smaller hospital.

He moved to the Midlands area in 1994 as part of his registrar rotation which included working for nine months in Hereford. Deji and his wife were probably the only black family in Hereford at that time but were made to feel welcome. He joined Heartlands Hospital in 2002 as a consultant, where he has been ever since.

“I chose Heartlands Hospital because when I visited it, it had the feeling of a family unit. The team is friendly and very different from what I experienced in Leeds. I can’t say for certain that I have had to work harder, but I do teach BME staff that you need to be prepared to work hard and be better than average.

“Things have improved but they will never be perfect. People are much more aware and experienced in diversity as there is more exposure and training than there was 20 years ago.”

“Be happy to be individual; be prepared to be the best”