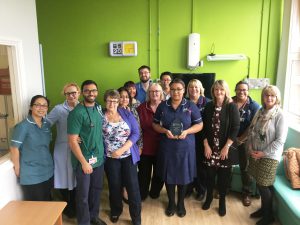 An elderly care ward at Good Hope Hospital led by an ‘inspiring’ nurse has been recognised for a raft of improvements over the past 12 months by being named winners of an annual award founded to ensure the legacy of a former patient.

Ward 9 at Good Hope, part of Heart of England NHS Foundation Trust, was this year’s recipient of the Jean Robinson Award, which is judged by Jean’s family who have been working with the hospital to improve standards in elderly care since her death in 2009.

Jean’s daughters Di Collins and Jan Gill regularly come into Good Hope to meet with elderly care matron Donna Woodings to discuss progress on the wards and to give a relatives point of view. The Jean Robinson Award was seen as a way to ensure a legacy for their mum and to push the wards to keep care standards as high as possible.

Di and Jan presented this year’s award to the senior sister on Ward 9, Simone Hudlin, who they said was a major reason behind their choice for the 2017 award for her ‘inspirational’ leadership and what she has been able to achieve with her team over the past year.

Di, from Tamworth, said: “Simone had just come into post when we came 12 months ago to judge for last year’s award and when we spoke to her she had lots of great ideas about how to improve her ward and it was clear coming this year that she has really followed through on those plans.

“You can see the passion she has for what she does. We were particularly impressed to see the fantastic new day room for families on the ward which she was so passionate about doing.”

Simone said it felt ‘brilliant’ to accept the award on behalf of her ward and to have the recognition for the hard work all her staff have put in since her arrival.

Initiatives she has spearheaded since her arrival include fundraising for the recently opened relatives room on Ward 9 and introducing enhanced observation bays for high risk patients which have made a massive improvement to falls numbers on the Ward.

She said: “We all work really hard to give the best possible care for our patients every day and it is not for any reward or recognition but to receive this award from people who have seen the improvements first hand; it says something about how far the team has come.

“Ward 9 at Good Hope was where I started my career so it’s been great to come back and be working with staff I was working with years ago who still have that passion for what we do. I’m just really proud of the whole team, as I have worked on the frontline day in day out and know just how hard they work.”