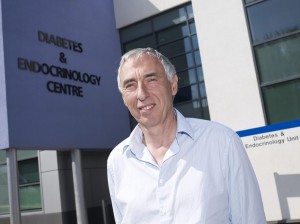 A Heartlands Hospital consultant physician has been named as one of the top ten diabetes researchers around the globe.

Professor Anthony Barnett is the only Brit named in the first ten of the World’s top doctors in the research and treatment of type 2 diabetes announced this week by expert ranking index, Expertscape.

The Professor has earned the acclaimed title of top researcher through publishing over 650 papers spanning 35 years of his career as a consultant at Heartlands Hospital, which houses one of the biggest diabetes units in the UK and as an Emeritus Professor of Medicine at The University of Birmingham.  Now semi-retired, Prof Barnett has major research interests in the genetics of diabetes and its complications, new drugs and use of new therapies for diabetes and health service related issues, including provision of diabetes care in the South Asian population.

Professor Barnett said: “When I started researching the causes of diabetes in the late 1970s and early 1980s, little was known about the condition.  A highlight during my career for me was to be among the first to develop a genetic map for the location of genes for type 1 diabetes in the 1980s.  Research that has enabled us to have a better understanding of the characteristics of type 1 diabetes,  the causes of type 2 diabetes and how complications develop have also been highlights for me.

“I’m surprised but pleased to have been named among the top ten diabetes researchers in the world.  We produce high quality diabetes research in the UK so it’s great for this to be recognised.  None of this could have been achieved without the support of all of the team I work with including the scientists, consultants, research nurses and researchers at Heartlands and the University of Birmingham.”

Clinical director for diabetes at Heart of England NHS Foundation Trust, Dr Srikanth Bellary, said: “This is a fantastic achievement for Professor Barnett and for the Trust.  The Professor and team have made significant contributions to diabetes care in the region and lead the way nationally in providing high quality diabetes services.”

The Expertscape list was compiled by ranking experts who have published the highest number of diabetes research articles that rank among those most frequently cited by fellow researchers, earning them the mark of exceptional impact.