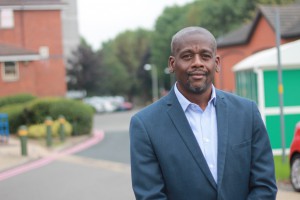 Byron was born in the late 60’s to Jamaican parents who moved to the UK in the 1950s. After arriving in the West Midlands, his parents eventually moved south to Reading in Berkshire, where they settled. His father worked as a machine operator and his mum was an auxiliary nurse. Byron is the youngest of six children. His mother worked nights for many years as an auxiliary nurse at several long-stay mental health hospitals before she ran private care homes for adults with disabilities.

Byron’s career started in engineering, but after a few years, he made the move into social care, taking an Advance Care Management course, before working for his mother as Homes Manager. He moved to Birmingham in 1993 after meeting his girlfriend and they got married a year later.

He started working at Birmingham City Council as an adult caseworker in the Learning Disabilities Team and gradually moved into HR and communications project work. After working for the council for over two decades, Byron made the move into the NHS last year when he joined the Heart of England NHS Foundation Trust communications team.

In his time at the council, Byron said he didn’t experience discrimination directly but was well aware of the inequalities others were facing. There were certainly occasions where he felt he was being held back. One particular female line manager turned him down for development opportunities and wouldn’t sign approval for training courses or a secondment opening that he was keen to apply for.

On reflection, Byron said: “It may have been race or gender inequality.  I was determined to develop my skills but kept coming up against walls. Even when a black senior manager came in to try and improve things, they didn’t as a complaint was made against him and he moved on. I stayed in the job for a little while longer, but as soon as an opportunity came up for me to move departments I did.

Other people I have known in my working career have also came across barriers to progression – whether that’s because of their colour or culture. In my experience in the council it seemed that black women progressed up the ladder faster than black men and I don’t know why that is. Jobs should be given on merit and not colour or culture. However the statistics show that senior manager roles often don’t reflect the community served and policies and processes can inadvertently be biased towards particular groups.”

Before leaving the council Byron was involved in an equality impact assessment project looking at how unconscious bias could be addressed and ensure that every new policy was assessed against the equality duty.

Byron is old enough to remember the time of government initiatives such as positive discrimination, that was then change to positive action, to support a more diverse workforce based across all job groups and types.

“I think there has been an improvement – changes in legislation have been instrumental in that, however more still needs to be done to secure the confidence of our entire workforce. I’ve not personally experienced it since joining the Trust, but have been involved in staff engagement events and heard about some unpleasant experiences. My experience here has been welcoming and an opportunity to grow and flourish. However, it takes real determination to succeed and grit to get through, which is not a skill but a mindset which we can all have.”

“We may not control all the events that happen to us, but we can decide how we respond to them.”