Celebs have a ball in support of sepsis awareness 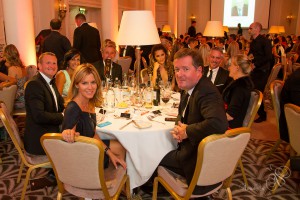 Sepsis, or blood poisoning as it is commonly known, is a life-threatening condition that arises when the body’s response to an infection injures its own tissues and organs. It can lead to shock, multiple organ failure and death – especially if not recognised early and treated promptly.  Around 37,000 people living in the UK will die of sepsis each year.  Most cases of sepsis are due to infections we are all familiar with: like pneumonia, urinary tract infections and bites, cuts or stings.

Proceeds from the auction will be used to provide educational resources for every health care professional in the UK, establish support networks in every region and kick start a public awareness campaign.

Dr Ron Daniels said: “It has been the first time the Sepsis Trust has staged an Inaugural Charity Ball and it was a sell-out.

“Everyone really enjoyed themselves and we raised a huge amount of money.  We have worked hard at Good Hope Hospital and it is to the credit of staff that we have one of the best patient survival rates nationally and internationally.  But there’s always more that can be done to improve to ensure the condition is recognised.  Raising recognition of the disease and increasing the number of patients treated quickly and effectively is the single most effective thing we can do to save lives.”