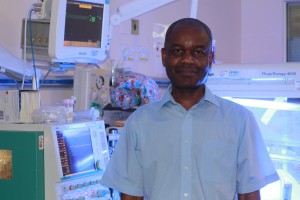 Richard was born in the area formerly known as Rhodesia, now known as Zimbabwe. Racial segregation was the norm at the time and black and white people were segregated with very little mixing. Richard’s dad owned a supermarket and he was also a farmer. He was forward thinking and encouraged his children to take full advantage of the educational opportunities available to them.

Richard remembers a time when he was 14 and was suffering with nose bleeds. A family friend recommended that he go and see a certain white physician. Richard wasn’t allowed to sit with the white patients in the waiting area or the veranda – he was made to sit on an empty drum in the back garden until the end of surgery. He was at last called in to the treatment room but the doctor didn’t ask what was wrong with him. He just asked him if he wanted a weak or a strong injection. Richard was shocked, but answered strong. The doctor gave him an injection and sent him on his way. To this day, Richard still doesn’t know what the injection was.

Richard wanted to study medicine and there was only one medical school in Zimbabwe and entry was fiercely competitive, with priority going to white students. Richard moved to the Isle of Wight to study for his A-levels, but had to return to Zimbabwe shortly after because his mother died unexpectedly and tragically. He ended up staying for three months and running his father’s shop. His father later remarried and Richard has eight siblings with three step-siblings. When it was time for him to return to school, Richard decided to continue his studies in London. He lived in youth hostels when he completed his A-levels and applied jointly to study medicine and medical sciences. He got a place at Liverpool University to study Medical Cell Biology and Biochemistry, which was sponsored by the Ministry for Overseas Development. On completing his first degree, he started applying to medical schools, not only in the UK, but in several other countries including Australia, Canada and Nigeria. Southampton offered him a place after a successful interview, but he had to pay for his tuition fees and he was unable to come up with the required fees. With time ticking on and despite applying for funding and grants, he was no closer to getting the money needed for securing his place. At the eleventh hour, the Ministry for Overseas Development agreed to sponsor Richard’s medical school training. After completing his undergraduate training, he embarked on his training in paediatrics starting in Wolverhampton then moving on to hospitals in Cardiff, London, Glasgow and Canada before returning back to the Hammersmith Hospital in London and finally settling in Birmingham.

He got his neonatal consultant post at Heart of England NHS Foundation Trust in 1996 where he has worked ever since. Richard met his wife, who is also Zimbabwean-born and an anaesthetist at University Hospital Coventry hospital, while she was on a training placement in the UK and they have an older daughter studying medicine and a son studying law.

Richard said “I’ve never encountered the levels of discrimination that I did when I was in Zimbabwe where discrimination was so obvious and with no redress. However, I have come up against covert bias when applying for jobs in the UK. There have been jobs for which I was eminently qualified which I failed to secure while less qualified white candidates got them. I don’t dwell on it though, as I would rather not work anywhere I am not accepted. When I look back I remember being the only black student in my intake (of 120 students) at medical school and I was the first black senior registrar in paediatrics at Hammersmith Hospital”.

I think there is now a greater uptake of roles by people from varied ethnic backgrounds and as a result I don’t feel quite as ‘different’ any more. My children were born in the UK and have been privileged to have access to much more than I ever did when I was growing up and they do not see themselves as being different from others in any way.

I have always worked very hard and being black, I’ve had to work even harder to be seen as equally competent or as good. The UK has offered me a lot of opportunities and I have been very happy here.”

“If you let the quality of your work be your hallmark, then no man, or woman, will be able to hold you back and deprive you of your due acclaim.”