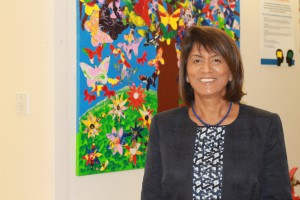 Roopa was born in a small laid back town Kolhapur in the state of Maharashtra in India in  the 60’s to a middle-class family. She is the second of three siblings in the family and the others still live at the family home in Kolhapur. Her mother was a Mathematics and Science teacher at the local high school and the family life revolved around the children’s education! Roopa wanted to be a doctor and to come to the UK for higher education since as far back as she can remember, and her education and training reflected her chosen career path from an early age. When she completed her post graduate Paediatric training in India, Roopa embarked on the next chapter of her childhood dream of coming to the UK for further training in Paediatrics. While her father encouraged and supported her adventure her mother was reluctant to let her leave the family home, especially as Roopa was planning to come to the UK on her own.

In an era before internet and emails she obtained information from an acquaintance in Kolhapur who was working in the NHS as a Psychiatrist in Oxford. Her correspondence with the GMC started and one day out of the blue she got letter from the GMC confirming her place on the PLAB test. Bright eyed and bushy tailed she arrived in London in March 1983 eight days before her PLAB test with one suitcase and £300 in her pocket. This was the first time she had flown in an aeroplane and travelled outside India.

She stayed at a YMCA near Warren Street tube station. In the youth hostel she met a few other Indian doctors who were also appearing for the same PLAB test and some of them had done it more than once before unsuccessfully. One of the doctors asked what she would do if she didn’t pass PLAB test. This thought hadn’t even entered her mind; she remembers replying ‘I have not failed any exam in my life before – I will not fail this one.’ She passed the PLAB test and was offered GMC registration. This was a dream come true but by this time, her £300 pocket money was almost finished and she couldn’t afford the registration fee.

Luckily within seven days of passing the PLAB she was offered a locum post as an SHO in Paediatrics at the Royal Preston Hospital in Lancashire and they agreed to pay for her GMC registration as an advance on her first salary. Fellow doctors in the YMCA warned her about racism in the UK and that she was unlikely to rise to a consultant level. In the 60s and 70s Asians in the UK probably did suffer from racism and a lack of equal opportunity but this was not Roopa’s experience.

The people of Preston were very welcoming. In her early days despite being able to speak English, Roopa struggled with understanding the local accents, especially over the telephone. Everything was new, there was so much to learn and adjust to. She would often stay on the ward to avoid telephone conversations when on-call; at this time doctors didn’t have to be on the ward when on call. The hospital staff viewed this as commitment, this helped Roopa’s progression. Being a junior doctor in the 80s was gruelling, being on call every other night and after the night on call, you worked the next day before going home the following evening. However the hospital provided free accommodation on site, you had a sense of belonging to the team and there were more opportunities to bond with the other junior doctors. She learned a lot about working in NHS in her first three months in Preston. During her time in Preston, Roopa was welcomed into the NHS Indian community and very quickly integrated with her neighbours and colleagues.

Over the next three years she passed her DCH and MRCP exams. Post-MRCH there were very few career guidance opportunities for the overseas doctors in the NHS at the time. In 1987 when she wanted to apply for senior registrar or research registrar posts, she was unexpectedly offered senior registrar post in a Military Hospital in Saudi Arabia where she worked in Paediatrics for the next six and a half years. In 1995 she came back to the UK initially working as locum Consultant in Paediatrics and finally in 1996 she was appointed as a Consultant Paediatrician at the Heart of England NHS Foundation Trust where she has worked ever since. She is also clinical director of Paediatrics at HEFT.

Roopa feels she grew and developed as a clinician, manager and most importantly as a person in her life in the UK during which Roopa has been married and divorced and is proud mother to two children in their twenties.

She says: “Coming to the UK was a dream come true for me. I have a sense of complete freedom and liberation that I never had in my hometown. Growing up as a girl in India and working as a young female doctor in Saudi Arabia, I always felt a sense of oppression which I have not felt in the UK. I think that women have to work twice as hard as men to achieve the same career goals, but I always felt I had equal opportunity to develop and progress in the NHS. I cannot say never, but rarely racism has held me back in my time in the NHS and in the UK.

I have visited India several times but since my divorce, I have found myself shunned by some members of the community. Both my sister and sister-in-law are doctors in India; they have followed their husbands and have played supporting roles in their careers and family life. When I talk to them it seems that they don’t have the same experience of freedom, independence and control of their destinies. I feel ‘I am the captain of my soul’ and although part of this must be related to my own personality, living in the UK and working in the NHS has certainly fostered this aspect of my personality.

I love living and working in the UK. My children and my NHS work have shaped my life here. I will be retiring in a few years and would like to do charity work related to the wellbeing of women and children in India but I have no plans to return there permanently. Even at my age the future is curious and mysterious and I don’t think I have fully explored the purpose of my life yet!’’

“Go for it, don’t let anything hold you back, the world is your oyster.”