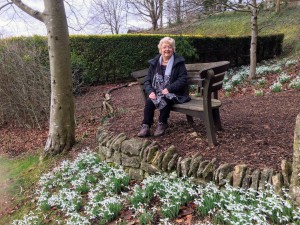 Monday 8 May is World Ovarian Cancer Day. A Sutton Coldfield woman is celebrating four years of being clear of advanced ovarian cancer after lifesaving treatment and surgery by the teams at Good Hope Hospital and Pan-Birmingham Gynaecological Cancer Centre at City Hospital.

Gill Freeman, 71, was first diagnosed with breast cancer when she was 55. She made the decision to have a double mastectomy and muscle taken from her stomach to reconstruct her breasts as her older sister Jeanette had died of breast cancer.

She made a good recovery and soon returned to work as a medical secretary for a private mental health facility and at 67, after 25 years, she retired. A few weeks later, when she was on holiday visiting her daughter and grandchildren in Dubai, Gill noticed that her stomach was swelling. When she returned home, she was also in pain, so she visited her GP who suspected it might be a hernia and referred Gill to a hernia specialist. An ultrasound scan revealed nothing suspicious and although she didn’t feel right in herself, Gill put the pain down to over exertion at the gym, where she goes regularly.

Over the next few days the pain got worse and she was struggling to breathe so she went back to her GP who referred her to Good Hope Hospital. There she had a CT scan of her chest as the medics suspected a pulmonary embolism. The results showed litres of fluid pushing up into her chest, affecting her breathing. Gill thought the breast cancer had returned, a view that was shared by the chest physician that was looking after her.

However, a blood test revealed high levels of CA125, which can indicate ovarian cancer. Consultant gynaecological oncologist Mr Janos Balega, who works for the Cancer Centre, told Gill that she had stage three ovarian cancer, which meant that the cancer had spread outside the pelvis up into the stomach.

From that point on, her life became a roller coaster. She quickly started a three-month course of chemotherapy at Good Hope Hospital. The plan at the end of the chemotherapy was for Mr Balega to carry out a ‘debulking’ surgery – the aim of which is to remove all the tumours. Mr Balega was successful and removed all cancer including her womb, cervix, ovaries, tubes, appendix, the fatty apron called omentum and other parts of the tummy, in a complex five and a half hour surgery.

The operation left Gill with no visible cancer and four years on, the grandmother of eight, is living a full and active life again. She enjoys gardening, going to the gym and spending time with her partner Brian. She also frequently visits Denmark and Dubai, where her son and daughter and their families live.

Gill says: “I am only here thanks to the efforts of Mr Balega and the teams who cared for me through both of my cancer diagnoses. I am so grateful for the amazing care they have given me – saving my life twice! I have a lot to thank the medical world for.”

Ovarian cancer affects 1 in 50 women in the UK – primarily postmenopausal women but in 20% of the cases, it develops in women aged younger than 50. Unfortunately, in early stages, ovarian cancer does not give specific symptoms and to date, there is no effective screening test available. However, certain symptoms can give a clue to doctors and patients. Please visit your GP if you are 50 or over and experience the following symptoms:

You should also visit your GP if you are over 50 and have symptoms of irritable bowel syndrome. Your GP should examine you, take blood test called CA125 and an ultrasound scan may also be required. If ovarian cancer is suspected, urgent referral to specialist gynaecological oncologists should be made by your GP.

Mr Balega said: “The aim of surgery is to remove all cancer – providing the best outcomes possible for the women affected by ovarian cancer. The Pan-Birmingham Gynaecological Cancer Centre at City Hospital offers world-class care and is renowned for its expertise in ovarian cancer. It’s one of the few centres in the UK offering the whole range of operations for ovarian cancer.

I am so pleased that we were able to help Gill recover from her cancer and that she continues to live a full and active life.”