A Sutton Coldfield couple have tied the knot in a ceremony on a Good Hope Hospital ward in an emotional ceremony brought forward after the groom was given just weeks to live. 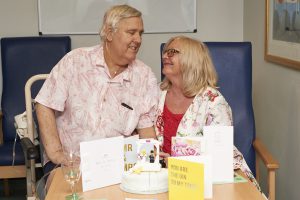 Bill Moss, 66, was being treated on Ward 23 at Good Hope Hospital, part of Heart of England NHS Foundation Trust, after being diagnosed a year ago with mesothelioma, a cancer on the lining of the lungs usually linked to exposure to asbestos.

Sadly Bill’s condition has deteriorated in recent weeks and his plans to marry his partner Margaret at Sutton’s registry office therefore had to be postponed; however the couple were still determined to hold the nuptials somehow.

Margaret said: “We booked to marry at the registry office but Bill was too ill to get there so they said we could do it at home but because he was in hospital the doctor signed a form to enable them to come into the hospital and do it here.

“We had the ceremony in the day room on Ward 23. My three sisters were able to come, as well as Bill’s son, his brother and his sister-in-law. Obviously everyone couldn’t be there as we had to do everything so quickly. Bill dotes on my niece’s little girl who is eight – I’m second best to her. She would have loved to come but had to be at school in Wales but she wrote him a lovely letter.

“Everyone on the Ward was great – some of the nurses came to the ceremony and others who were not on duty were disappointed as they wanted to be bridesmaids. It was quite emotional but we asked for the ceremony to be as brief as possible as Bill gets out of breath quickly. It was really nice though.”

Margaret and Bill have both been married before and met around six-and-a-half years ago at line dancing and have been ‘wonderfully happy’ ever since.

Margaret added: “Bill is very lovable. Everyone likes him – he is very, very popular. Everyone wants to come and see him but he is not really well enough.

“We don’t know how long he has left. They are looking to get him into a hospice soon. It is really hard but having the wedding has brought us some joy at a difficult time.”

Ward 23 sister Kathryn Whitehouse said the team on the Ward were more than happy to assist in any way to make the wedding happen.

She said: “We have all really got to know Bill and Margaret while he has been on the Ward and they are a lovely couple so were delighted to help make this happen. It was a really nice ceremony and we were honoured to be a part of their big day.”

Bill has since been moved to St Giles Hospice to continue his treatment.