Twelve Days of Christmas – on the eleventh day…

On the eleventh day… 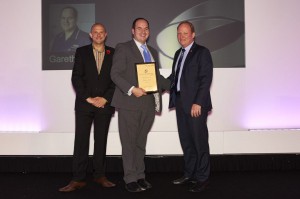 Gareth Shaw, a senior charge nurse on Ward 11 at Good Hope, was recognised at the Building Healthier Lives Awards for introducing a new way of looking after patients with advanced dementia.

Gareth began the ‘calm care’ concept to ward 11 last July. One of the four-bedded bays is dedicated to looking after patients with advanced dementia. Dementia patients often become agitated by many things happening at once and noisy environments. The ‘calm care’ approach means that the bay has a nurse in it at all times, and only one caring activity takes place at a time i.e. phlebotomists taking blood or observations being taken. The door is kept closed at these times and the room is kept calm.

‘Calm care’ is still in the early stages, but has already seen a big difference with less falls, less patient aggression and more settled patients across the whole ward, not just in the calm care bay.

Gareth has encouraged his team, the patients and relatives to get involved by suggesting ideas for this bay and this is shown on the wall of Ward 11 as a large tree with suggestions leaves attached to it.

Donna Wooding, matron for older adults, nominated Gareth for the Patient Safety Award and said: “The concept of calm care has already sparked an interest Trust-wide and has been shared amongst our colleagues across the country on Twitter.  I think Gareth deserves the praise and recognition for this idea as I am sure we will see it being used not only in all of our hospitals but in others across the UK.”

Simone Hudlin, Ward 9 Manager, also nominated Gareth Shaw and Ward 11 for the award, saying: “This approach offers a very calm and relaxed environment for our patients with dementia or delirium. It offers a safer and more individualised approach to the care they receive. By involving other members of the multidisciplinary team it means that everybody is on-board with it and it’s led to a reduction in harm to our patients.”

Gareth is delighted with his award and said: “The dedicated team on Ward 11 have driven this new concept and established new ways of working to provide best care for our patients. If it wasn’t for them, calm care would not be as successful as it is today.”