Twelve Days of Christmas – on the fourth day…

Home > Uncategorized > Twelve Days of Christmas – on the fourth day…

On the fourth day of Christmas… 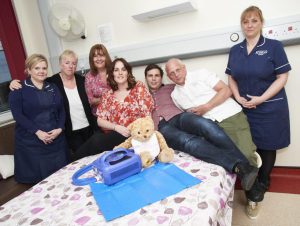 A West Midlands family raised £4,000 to purchase a CuddleCot for the bereavement suite at Good Hope Hospital, in memory of their daughter Willow.

Sam Phillips and her partner Carl were at a routine 28 week scan, when they discovered that their daughter Willow had no heartbeat.

Sam delivered Willow two days later and thanks to a piece of equipment called a CuddleCot, Sam and Carl were able to spend five days with their daughter, giving them and their wider families valuable time with her. They spent the five days in the Snowdrop Suite, an area at Good Hope Hospital for families who are experiencing early miscarriage, stillbirth, or neonatal death.

The CuddleCot cooling mat is placed under the cot or Moses basket and allows the family to spend time with their child, without distressing trips to and from the mortuary.

Sam and Carl were determined to raise money for more CuddleCots, so organised a sponsored walk around Sutton Park with their families and friends – raising £4,000 to purchase a new one.