Twelve days of Christmas – on the fourth day…

On the fourth day… 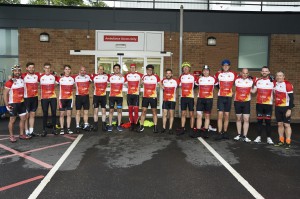 Sepsis survivors and campaigners from the West Midlands successfully completed a 147 mile bike ride, Cycle4Sepsis, to Cardiff to help raise awareness of the deadly disease, which claims over 44,000 lives in the United Kingdom every year.

Julian Hull, consultant anaesthetist and Phil Cawkwell, a nurse practitioner, set off from Good Hope Hospital along with 22 other cyclists from ‘Team Sollis’. Team Sollis was started by Brad Sollis, whose dad, Mark, survived a severe case of sepsis.

Sepsis kills more people than breast cancer, bowel cancer and prostate cancer combined every year. Commonly known as blood poisoning, sepsis is a life-threatening condition that arises when the body’s response to an infection injures its own tissues and organs. It can lead to shock, multiple organ failure and death – especially if not recognised early and treated promptly. Around 8,900 people in the West Midlands are diagnosed with sepsis every year.

Mark Sollis, from Tamworth Staffordshire, spent months in hospital after what he and his family thought was a case of flu, turned out to be sepsis. Luckily for Mark, the medics at Good Hope Hospital spotted it very quickly and he made a full recovery.

Dr Julian Hull,consultant anaesthetist at Good Hope Hospital, said: “Over the years I have witnessed many people dying from septic shock and others suffering the long term effects of this condition. The best ways to reduce death and injury as a result of sepsis and septic shock are through early recognition, resuscitation and timely intensive treatment. ”

Dr Ron Daniels, consultant anaesthetist at Good Hope Hospital and founder and chief executive of the UK Sepsis Trust, joined Julian and Phil for the first leg of their journey and said: “Now in its fourth year, Cycle4Sepsis has grown from a few riders cycling from Good Hope in 2012 to a major national event with nearly a hundred riders from locations across the UK riding to heighten awareness of sepsis and raise much-needed funds for the Sepsis Trust. In a new twist this year, thanks to the commitment made in Westminster to national action on sepsis in England, riders headed to the Synedd Building in Cardiff to re-invigorate the Welsh government.

“I’m incredibly proud to have brought the charity to a level of national influence from our roots developing the Sepsis Six at Good Hope Hospital in 2004.”