Twelve Days of Christmas – on the third day…

Home > Uncategorized > Twelve Days of Christmas – on the third day…

On the third day of Christmas… 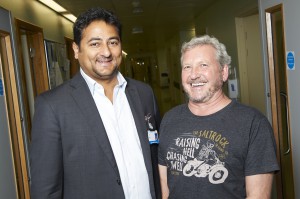 A man from Warwickshire has a new lease of life after a team from Heartlands successfully implanted a custom built 3D-printed titanium sternum and ribs to replace those that were removed following a rare bone infection.

60-year-old Edward Evans’ story featured on BBC2’s Trust Me, I’m a Doctor in February. He is the first patient in the UK to receive this type of implant, and only the second in the world. He became ill and surgeons had to remove part of his sternum and ribcage in 2011 after it became infected. Edward, a keen sportsman and former rugby coach, felt vulnerable with just a thin layer of muscle protecting his heart and lungs.

Cardiothoracic surgeon, Mr Ehab Bishay, had read of the world’s first 3D implant by a team of surgeons in Spain and he collaborated with Australia-based medical device company, Anatomics, creating a custom built titanium implant that precisely replicated the structure of Edward’s sternum and rib cage and was implanted during a four hour surgery.