Twelve Days of Christmas – on the twelfth day…

Home > Uncategorized > Twelve Days of Christmas – on the twelfth day…

2018 is a New Year and we thought we’d spend the twelve days of Christmas sharing some stories and successes from the last year from across the Trust.

On the twelfth day… 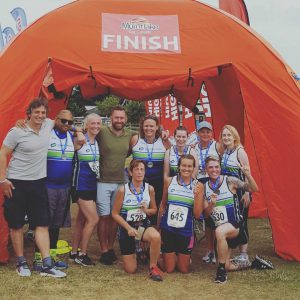 A team of 12 members of staff at Good Hope have completed a demanding triathlon challenge to help support their patients at the toughest time in their lives.

The dedicated dozen swam, cycled and ran as they completed the City of Birmingham Triathlon at Sutton Park, with three members of the team taking on the full Olympic distance triathlon.

It was the second year running that the oncology team at Good Hope had organised a team to take on the popular event and staff including nurses and doctors from across the Trust’s oncology department, as well as staff from pharmacy, tackled the 1,500m open water swimming, 40k cycling and 10k running disciplines.

Clinical nurse specialist and organiser of the triathlon team Rachel Powell, was one of the three staff members to take on the full Olympic distance triathlon, and said that although the event was ‘exhausting’ it had also been a ‘humbling’ experience.