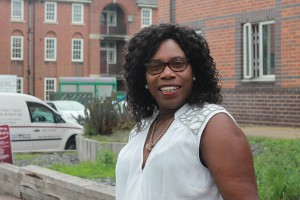 Veronica was born in Jamaica, one of five children. Her mum left when she was very young child and emigrated to England where she remarried, so Veronica and her siblings were raised by her father, family and servants. Her older sister came to the UK a few years before during a recruitment drive in Jamaica, where she trained as a nurse and finally a midwifery tutor. The options for Veronica were to travel to the UK and train to be a nurse, or to the USA to study business at Harvard College.

She opted for nurse training and arrived in the UK in the 1970’s as a teenager and went directly to the Walsall School of Nursing, where she also lived. All nurses had to do six weeks PTS (Preliminary Training School), which was a series of courses (theory and practical), interspersed with work on the wards.

Veronica found the change in culture very difficult – she had come from a wealthy family, where her dad was the director of import and export business in Jamaica and she had lived in a large house with servants, maids, housekeeper and chauffeurs. They were not allowed to travel on public transport and Veronica and her siblings went to private schools.

Arriving in 1970’s Britain, where people were unfriendly, smoked and drunk, was a huge culture shock, particularly seeing the ways some females behaved. She didn’t like the food (found it bland and tasteless), couldn’t understand the accents, and no one spoke to her. She was the only black woman in her intake and spent many a night in her nursing home room crying. Veronica could not express this to her family as her dad was boasting at his business meetings about his daughter going into nursing. The academic achievements of their children were a regular topic in these business meetings.

Veronica had a very bad stutter as a child and had difficulty in communicating most of the time. After an extremely upsetting run-in with a horrible matron during handover, Veronica took time to practice her talking and communicating in front of a mirror every day on her own in her room. This drastically changed her ability to communicate, and allowed her to become more confident and able to challenge appropriately.

Despite her struggles, Veronica threw herself into her studies and passed her training with top marks. She was also one of only three nurses to successfully complete her training out of 12. After a couple of jobs at other hospitals, she moved to Good Hope Hospital as a midwife and worked there for 14 years, before moving to Solihull Hospital as an acting Matron before she transferred to Heartlands. She now works as a Trust Convener/Midwife and Staff Governor. She has three adult children. Veronica is also a Magistrate and sits in criminal and family courts.

Veronica says: “When I first came to the UK and into the NHS, I experienced a lot of prejudice. It’s more subtle now because of legislation, but it still exists. My family came first so I couldn’t achieve all that I wanted to, but I still had to work twice as hard as a black woman to succeed. However, I loved nursing and helping others. I wouldn’t have wanted to do anything else.”

We asked Veronica what words of encouragement she would have for other young black women just starting out in the NHS and she replied:

“Silver and gold may perish away, but a good education never decays.”