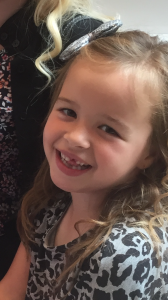 Medics at Heart of England NHS Foundation Trust are involved in the 100,000 Genomes Project – a national ground-breaking project to sequence genomes from patients across the UK.

The aim is to collect and sequence 100,000 whole genomes – your body’s unique genetic code – from patients with rare diseases and their families, as well as cancer patients to enable doctors to understand the conditions better and potentially develop new treatments and patient-specific personalised care.

One patient who is involved in the project is Alexcia Williams, a six-year-old girl, who has been suffering from an undiagnosed condition since she was seven months old.

Her combined symptoms have been linked to genetic diseases such as Ehlers Danlos Syndrome and Hereditary Haemorrhagic Telangiectasia. However, despite numerous medical tests throughout her childhood, a definitive diagnosis has still not been found.

Alexcia’s family are hoping the genomes project will offer them not only diagnosis and treatment for Alexica, but also for her one-year-old brother Charlie who is exhibiting the same symptoms as his sister.

Natasha Williams, Alexcia’s mother, said: “We just want answers and we have gone so long without knowing what the cause is. It’s even more important now as Charlie is now suffering from the same symptoms as his sister.

“We don’t want him to go through all the long tests and treatments that she has had to have. It would dramatically improve our quality of life to be able to have the proper treatment and diagnosis for both our children.”

Mother-of-three Natasha explained how every time Alexcia has an episode, it results in hours spent in hospital to ensure she doesn’t have any complications.

They are hoping that by taking part in the 100,000 Genomes Project, in the future they will have more guidance on how to manage the condition, allowing them to spend less time in hospital and resume a normal family life.

This Trust is one of 18 NHS trusts across the region which have come together to form the West Midlands Genomic Medicine Centre (WMGMC) – one of 13 such collaborations in England which are delivering the (100,000 Genomes Project).