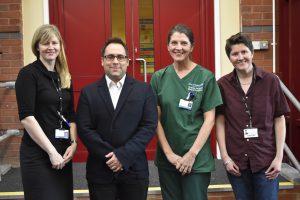 A group of emergency health and care professionals at Heartlands Hospital have been chosen from hundreds of applicants to represent the West Midlands in a prestigious competition to mark the NHS’s 70th birthday.

As regional champion in the Excellence in Urgent and Emergency Care Award, the HECTOR project will now vie with other regional winners from across England for a national award to be presented at a special ceremony in the Palace of Westminster in July.

The NHS70 Parliamentary Awards, sponsored by IBM and Teva, recognise the massive contribution made by the individuals who work in and alongside the NHS.

Launched in February, it asked the region’s MPs to find and nominate those individuals or teams they thought have made the biggest improvements to health services in their constituencies across ten categories. The Heartlands Elderly Care, Trauma and Ongoing Recovery Project (HECTOR) at Heartlands Hospital was nominated by Yardley MP Jess Phillips.

From over 750 entries, senior experts have chosen four outstanding nominations in each category, which exemplify the best of what the NHS and its partners do day in, day out.

The HECTOR (Heartlands Elderly Care, Trauma and Ongoing Recovery) Project was created to improve outcomes for older patients who sustain traumatic injuries. It has changed the way emergency department staff are trained, and shown that the care delivered on wards has a positive impact on individual patient outcomes, aiming to get people back to their own homes safely.

“To be recognized for such an award is a fantastic achievement for the whole team. HECTOR has always been about patient-centred care and changing our perspectives of what constitutes major trauma in an ageing population. The team consists of wide range of extremely passionate and committed individuals from lots of different backgrounds and speciality teams. We appreciate the need to bring such people together and reduce silo-based working for the good of patients. We hope that we will be able to continue highlighting the issue of “Silver Trauma” and this award represents a great platform on which to build our future direction.”

Dr Kiran Patel, Medical Director for NHS England West Midlands said: “The Parliamentary Awards have given the NHS a fantastic opportunity to recognise those who provide the very best healthcare to people as part of the NHS’s 70th anniversary celebrations. Our NHS staff work hard to ensure that local services are delivered to the highest standards and I am delighted that two West Midlands organisations have been recognised and wish them luck in the final.”

All of the champions will now be invited to the national awards ceremony, which will be held on July 4th, the day before the NHS’s 70th birthday.

The ceremony will be hosted by Dr Sara Kayat, NHS GP & TV Doctor best known for This Morning, Celebrity Island with Bear Grylls and GPs: Behind Closed Doors.

The regional champions will now go forward to a final stage of judging by a panel including the leaders of Royal Colleges, the Unison trade union, and the Patients Association – collectively representing millions of health and care workers and patients.