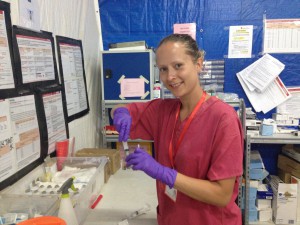 Two Birmingham medics who have recently returned from fighting the Ebola epidemic on the frontline in Sierra Leone have spoken about their ‘life-changing’ experience.

Debbie Hawker and Mike Gibbs, who both work for Heart of England NHS Foundation Trust, flew out to West Africa earlier this year for a five-week stint working with Save the Children at a Department for International Development (DFID) funded facility in Kerry Town, a focus for the treatment of Ebola patients.

After spending three weeks in quarantine being monitored on their return, the pair are now back at work and to everyday life but have spoken about their experience battling an outbreak that has so far claimed almost 10,000 lives.

Debbie, 30, a TB Specialist Nurse working between Birmingham Chest Clinic and Birmingham’s Heartlands Hospital, admitted she was anxious when she got the call to go out to West Africa but said the ‘great’ team around her made her feel at ease.

She said: “Once we signed up it was a real rush and I didn’t have much time to stop and think, although I was quite anxious but everyone in the team was in the same boat. The team we were with were really ace and we all stuck together.

“None of us had done this before so we were all on the same level, whatever our positions back home, which was really nice. There were a mixture of nurses, doctors and paramedics – there was no hierarchy just a really good cohesion.”

Joining Debbie in Sierra Leone was 30-year-old Mike Gibbs, a Trainee Advanced Clinical Practitioner at Heartlands Hospital, and he admitted that his family had concerns when they heard he was going out to work in potentially life-threatening conditions. 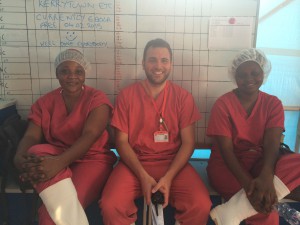 He said: “My wife knew I was interested in doing humanitarian work but when she heard it was Ebola she was concerned because of that fear factor that people have. However we watched a couple of documentaries on TV and she found that useful as she could see the setup out there and understood how it worked.”

Before going out the pair did not know what to expect but were well prepared with intensive training, particularly around the use of PPE (Personal Protective Equipment), which proved a challenge in the searing heat of Sierra Leone.

Debbie said: “We had training about putting on the PPE and taking it off correctly. We also each had a ‘buddy’ so you would make sure each other had our suits on properly and there would also be another check from someone else before you went out.

“You were really responsible for each other’s equipment so you had to put a lot of trust in the people you were with. That is probably why the team really bonded so well. You were putting your lives in each other’s hands.

“At first wearing the suits in those temperatures even half an hour seemed too much and you would be drenched in sweat and it was quite claustrophobic. However the more you had it on the more comfortable you became and by the end of our time out there it just became normal – just part of going to work.”

Mike agreed, he added: “It was daunting at first. You are just so careful about touching anything. The heat also really hits you as well and you feel your heart beating quicker and breathing fast. But you get used to it, it all becomes the norm.”

Sierra Leone, like neighbouring Guinea and Liberia, has suffered unimaginably from this devastating outbreak but both Mike and Debbie said the situation appears to be improving and the people are coping remarkably well.

“I was expecting it to be a lot worse than it was actually,” Mike said. “I had a picture in my head of so much death everywhere and had watched a Panorama programme that was really upsetting so I had prepared for the worse. 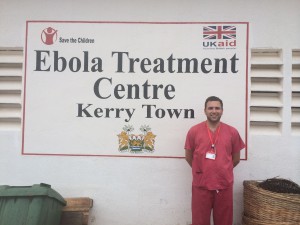 “But by the time we went out it was clear that cases were beginning to drop off and people are starting to go about their daily lives again.”

“They are really strong people,” Debbie added. “They have been through so much, with the civil war only ending about 13 years ago and now Ebola. You don’t meet anyone who has not lost someone through Ebola.

“We also worked with some brilliant national staff who were really welcoming. We were only there five weeks and they would constantly be seeing different international staff coming over but they were still so grateful and welcoming to us all.

“It could be difficult with the language barriers but by the end we had learned a bit of Krio which is the local language.”

Mike agreed, he said: “They really went out of their way to make us feel welcome. They were even bringing us presents by the end!”

Mike said he did miss his family and human contact while he was away – but for Debbie it was a real wrench to leave and a challenge to return to normality.

Mike said: “I missed my wife and my family and just the normal interactions with people. It becomes normal not to touch anyone so I missed that interaction. I would still love to go back though.”

“Although I did miss my family and friends I was not ready to come home really,” Debbie said. “At the beginning you are just learning and then quickly you are considered an expert. I felt like I was at my best when it was time to come home as I felt really comfortable. As soon as I came back I wanted to go back out again.

“When you get back you have to spend 21 days in monitoring and you just don’t know what to do with yourself. I couldn’t go to work and get back into a routine so it was really strange and quite a come down from the adrenaline of being out there.

“I really missed the team as soon as I got back and we spent a lot of time messaging one another. It was such a unique experience which made it difficult to turn off as I had been with those people in an intense situation 24/7 for six weeks.” 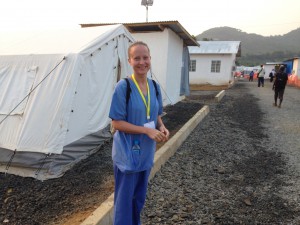 It was clearly a transformative experience for both Debbie and Mike and a huge learning curve as well, with new ways of communication one of many things they learned.

Mike said: “I learned a great deal but I think communication was a big one. Also just seeing how important it is just to do the basic care well in a very challenging environment.

“I have also learned not to be so wasteful. We have limited resources and the experience has made me more aware of looking at a holistic approach and appreciating things more.”

Debbie continued: “Communicating with people was really difficult as you were covered in these huge suits. As a nurse when you are treating children you want to smile, put them at ease and show them you are a real person but when they can only see your eyes it is hard. You have to learn new ways to communicate.”

To read Debbie’s blog about her experiences in Sierra Leone visit https://departmentofhealthuk.exposure.co/ebola-stories-coming-home