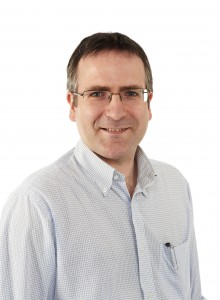 Doctors at Birmingham’s Heartlands Hospital have secured funding for two research projects that could transform the lives of patients with cystic fibrosis by allowing them to better monitor their own health and spend less time in hospital.

The West Midlands Adult Cystic Fibrosis (CF) Centre at Heartlands, part of the Heart of England NHS Foundation Trust, is the fourth largest adult CF centre in the country, caring for nearly 400 patients.

The CF team is to conduct two separate studies that will utilise modern technology with the aim to improve the quality of their patients’ lives and free up hospital beds and staff time.

The first study will allow patients with the life-limiting condition to monitor their own lung function, with the aim to catch chest infections earlier so they can be treated more promptly before they require hospital treatment.

Dr Ed Nash (pictured, left), who is leading the Home-CF study, explained: “Cystic fibrosis mainly affects the lungs and patients get recurrent chest infections and often have to have courses of antibiotics. Therefore we see the patients pretty frequently.

“Despite this, it happens quite regularly that patients will turn up with a chest infection and they will say they have been unwell for a few weeks but they did not come to get checked out as they didn’t want to cause a fuss. They then have to spend a couple of weeks in hospital.

“Therefore we wanted to help patients to catch these chest infections earlier so we came up with the idea of asking patients to test themselves at home using a spirometer, which is a lung function machine. The patient blows into it and it gives a reading of their lung function.

“The idea is that they will be given a mobile phone with a pre-programmed symptom diary and they will then record their symptoms and test their lung function twice a week. Using Bluetooth technology the results are then transferred by an encrypted link to a website so we can monitor the patients without them having to come to hospital.”

As part of the study, funded by a £300,000 grant from the National Institute for Health Research (NIHR), 100 patients will be recruited, half receiving a home monitoring kit and half receiving standard, routine care. The outcomes will be assessed over a 12-month period.

It is hoped that those patients receiving home monitoring will require fewer days in hospital, which is obviously better for hospital capacity. The study will also assess patient quality of life and value for money for the NHS.

A second study has also been green lit thanks to £2,200 of charitable funding from the Trustees of the West Midlands Adult CF Centre. The Virtual-CF study also aims to use technology to improve the quality of life of patients. It will utilise video conferencing so that people with CF on intravenous antibiotics for a chest infection can receive better care.

Dr Nash said: “When CF patients need intravenous antibiotics, they can either receive them in hospital or in the community. We worry that those patients receiving treatment in the community don’t get as much chance to interact with the team and ask questions.

“The CF team also can’t assess the progress of these patients as well as inpatients and therefore can’t adjust their treatment accordingly. We are therefore conducting the Virtual-CF study which will enable half of the patients receiving intravenous antibiotics in the community to have a video conference with the CF team twice a week so that we can touch bases with them.

“The patients receiving virtual care will be given a spirometer to test their lung function in the community and they will also have an oxygen saturation monitor which they will use during the video conference. About half of our patients are either employed or in education so this will allow them to continue with their daily lives, but still receive some of the benefits of being in hospital. It should hopefully lead to a better quality of life for those patients receiving virtual care.”