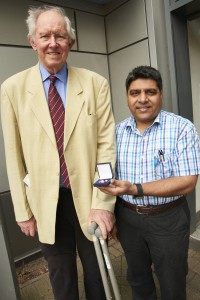 A Heartlands diabetes patient has been presented with a prestigious medal in recognition of his ‘courage and perseverance’ of living with the condition for over half a century.

Peter Sarjeant, from Stechford, has been presented with Diabetes UK’s Alan Nabarro Medal, which is awarded to people who have lived with Type 1 (insulin dependent) diabetes for 50 years. Alan Nabarro waged a lifelong battle against discrimination of people with diabetes. In 1968 he was awarded the OBE for his work with young people in London.

Peter, 72, was diagnosed with diabetes at the age of 21, and said that living with the condition has changed radically for the better in that time.

He said: “50 years ago life was so different in terms of the way diabetes was managed – there was no flexibility. When I first went into hospital to be stabilised you would get a fixed amount of insulin every day and that had to be balanced with the right amount of food.

“The management of Type 1 diabetes is so much more flexible now. In 2010 the hospital sent me on a five day course on Dose Adjustment For Normal Eating (DAFNE) and that brought me a whole new insight into what we should and shouldn’t do. I am now able to eat, within reason, whatever I want to eat and adjust the insulin myself to balance.

“Blood tests were also so different 50 years ago – it would take 30 minutes to analyse a sample of blood in the hospital laboratory. At Birmingham General, as it was then, I used to be taken into a room to wait for the blood to be analysed which was a bit like a bottling plant. Today it’s do-it-yourself and instant.

“Very recently modern gadgets have become available that allow for an instant blood sugar reading without the need to prick my fingers anymore like I used to, which is fantastic as that was becoming a real struggle. 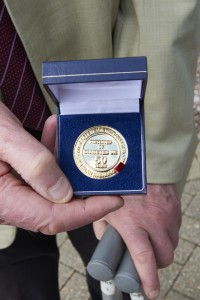 “People being diagnosed nowadays have far more options then I had back then. There are also centres of excellence like here at Heartlands that are fantastic and the team here are superb – I don’t think we realise how well off we are now.

“Hopefully more and more people will be able to get to receive a medal like this because of these improvements in treatment.”

Dr Muhammad Azam, senior specialty doctor for diabetes at Heartlands, presented Peter with his medal and said it had been extremely rare for a diabetes sufferers to reach this landmark but that is all beginning to change.

He said: “It is a pleasure to be able to present Peter with this medal as it really is a huge achievement. A few decades ago this was unheard of but I would expect it to become more and more likely because of the improvements in managing the condition.

“The biggest improvement has been in the education around diabetes because it was just not there a few decades ago.  People with diabetes can be educated to become an expert for life and manage their condition.”