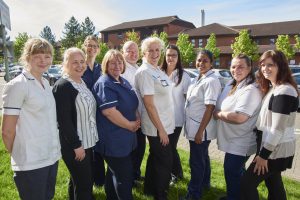 A new team has been set up in Solihull with the aim of reducing the number of people admitted to hospital after a fall.

There are about 2,600 Solihull patients a year who end up in hospital following a fall and admissions are estimated to cost the health service about £7.5 million a year in the Solihull area alone.

The new team, officially launched at the start of April, aims to reduce the number of hospital admissions through prevention work in the community.

The new project, which is a relaunched and expanded version of a previous team, also aims to increase the amount of patient referrals and reduce the number of days patients spend in a hospital bed.

The team is double the size of the previous team and now has 12 staff including physiotherapists, nurses, occupational therapists and support workers.

The community team works with Solihull patients only and its work is aimed at people over the age of 65 who are at risk of falling or have fallen in past three months.

The Solihull Falls Team takes referrals from care homes, GPs or district nurses and sees patients in their own home where they carry out an assessment and then look at what can be done to help.

It may be that an exercise programme could help or the provision of useful equipment or help with anxiety management. Sometimes patients are referred on to other services or their GP becomes involved.

“Previously we did have a waiting list of about five to six weeks and we are looking to respond more urgently now – within a couple of weeks if we are able to. We are also escalating our avenues of referrals, getting the district nurses on board and doing a lot of teaching and training. It is everyone’s responsibility to identify people at risk of having a fall.”

The team is aiming to carry out more teaching and training with groups such as district nurses and community health teams.

Fall prevention work is vital because a patient who falls may end up in hospital with a fracture but equally having a fall can create other problems. For example, it can lead to social isolation, reduce independence and general care.

Often it’s not just physical but social and emotional impact. Falls impact on mental as well as physical health, with an increased fear of falling resulting in activity avoidance, social isolation and increasing frailty.

Rebecca Webb, specialist falls advisor, said: “This new team is all about reducing the risks as we can’t always stop falls from happening so it’s about putting measures in to try to prevent and reduce falls.”

The team is based on Ward 10 at Solihull Hospital.