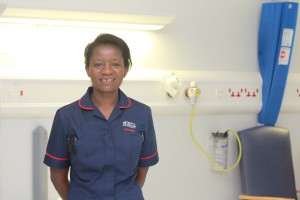 Tsitsi, or Rachel as she likes to be known as it is her nan’s name, was born in Zimbabwe in the years of apartheid. Her father was politically active and had to flee to Zambia with his wife, Rachel’s mother. Rachel stayed behind with her nan and continued her education. Sadly her nan passed away and she went to live with her uncle. He raised her to know the importance of education and made it clear that any job, other than a nurse, doctor, teacher or lawyer, wasn’t acceptable. Not believing herself to be clever enough to be a doctor, Rachel decided to go into nurse training. She trained in Zimbabwe, at Parirenyatwa Hospital, in Harare.

Once she had completed her training, she spent four years working as a nurse in Zimbabwe, which she loved and thoroughly enjoyed. She got married and had two young children but unfortunately the marriage broke down.

By this time, Rachel’s father had moved to the UK with younger siblings. When her marriage broke down, he and her siblings encouraged her to move to the UK. So at the age of 27, Rachel left her daughters with her sister-in-law and flew to England – determined to make a life for her and her children.

She went to Durham where she self-financed and completed a three month adaptation training so she could register with the NMC. She also self-funded and completed the Theatre Course in Newcastle-Upon-Tyne. She found everyone really friendly up north, but ideally wanted to be in the West Midlands where her family lived. She began applying for jobs and was offered interviews at Good Hope Hospital and a hospital in Bristol. Her interview at Good Hope went very well and she built a rapport with the senior nurse who interviewed her, as her son had also lived in Zimbabwe.

She started at Good Hope Hospital in 1993 as a D grade Staff nurse. She found it hard at first to integrate and there were no other black nurses in theatres. However she worked hard and saved all the money she could so that she could afford to bring her daughters to live with her. It took two years but they were finally together as a family. Her parents lived in Kingswinford and were able to help out bringing up Rachel’s daughters, which was a huge help. She believed that moving up the ranks of nursing wasn’t for her and was happy to remain as a D grade. However, a senior sister saw her potential and encouraged her to apply for an E grade role. She didn’t get it, but felt more confident to apply for a similar role the next time it came up and that time she was successful.

Further opportunities to work as an F grade nurse arose and Rachel eventually worked her way up to her current role as matron of theatres, day surgery, pre-operative clinic and surgical admissions lounge. Working in theatres is challenging but she loves it.

Rachel said: “I don’t see colour as an issue. On the very rare occasion I have experienced discrimination or inappropriate behaviour in the UK, I will take someone aside and tell them that it’s not acceptable. It’s nothing compared to what myself and my family went through in Zimbabwe. I believe that here in the UK, I am equal to everyone else.

I have been brought up to work hard. My uncle instilled a good work ethic in us and I was helping out in his shops when I was just seven or eight. I think that if you work hard you will achieve.”

“Colour should never be an issue. Capability and determination is all that counts.”