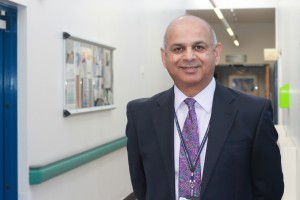 Riaz was one of five siblings, born in Rawalpindi in Pakistan to a military family. His father and four generations before him were all military. His home life was regimented, and he started his schooling at a Roman Catholic school in Rawalpindi. When his father was posted to places around Pakistan, the whole family went and Riaz continued his education at various grammar and boarding schools. He graduated from university with a BA in Politics, Economics and History. His older brothers had both gone on to join the army, one as a cardiologist and the second as Infantry officer. Although Riaz’s father was keen for him to follow his footsteps into the army, it had become clear that this wasn’t going to be the case.

He began a Masters in International Relations and it was when he was in his third semester, that he was offered a job in sales and marketing in the State Oil Company. Looking at the options open to him when he graduated, Riaz decided to take the job and worked his way up to a senior level manager. He married his wife, who was a British born Pakistani from Birmingham, in 1985 and they had their first child in 1990. Riaz and his wife decided to relocate back to the UK for family reasons and in 1994, they moved to Birmingham.

Riaz admits this was a difficult time for him, as despite his many years of experience, he struggled to find a job. After seven months of unemployment, he did some marketing for the Employment Service for three months before he applied for a job as a healthcare assistant at Heartlands Hospital. It was only when he was offered the job and was being measured for his uniform that he realised what it would actually entail! He worked in outpatients and although he enjoyed working with people, it wasn’t a role he could see himself in for the long-term future.

His wife told him about a job at Mind, so he joined a community based mental health project there before applying for the role of equal access facilitator at Heart of England NHS Foundation Trust in 1997. In 2013, he became the head of equality and diversity.

I did encounter it once in my private life. It wasn’t long after 9/11. I was taking my eleven-year-old daughter to school. A lorry driver pulled up alongside my car and started shouting abuse, calling me a terrorist and swearing at me. I was shocked and horrified, but I didn’t react as my daughter was so upset.

That’s always stayed with me and I am very glad that it’s been the only time I have experienced racism.”

“If you put the patient at the centre of your daily work, you will feel good to work for the NHS.”