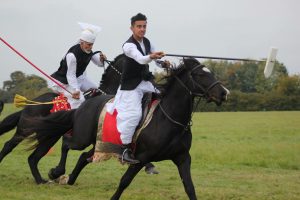 An IT apprentice has been selected to represent Britain at the ancient sport of tentpegging.

Zeeshan Mehmood, who has been given his first call-up for the British tentpegging team, will be taking part in a major international tournament in Durban, South Africa.

Tentpegging is an equestrian sport which involves picking up wooden tent pegs from the ground on a galloping horse – using a sword or lance. It dates back centuries and is highly skilled and can be spectacular to watch.

Zeeshan, who started as an apprentice with our Trust last December, will be one of five riders in the GB under-21s team for the five day event at the end of June.

His colleagues in IT at Heartlands Hospital are all very proud of him and will be supporting him from afar.

Zeeshan, who has just turned 21 and lives in Birmingham, was delighted to get his first call- up for the national side.

He said: “It’s an absolute honour. My family are very proud and my work colleagues are supporting me as their ‘younger brother’ and that means a lot to me.”

He loves the excitement you get from competing in the sport.

“When you’re on the horse and everyone is watching you and the pressure is on you, that gives you a real adrenalin rush.”

A team of riders competes in individual and team classes and the winning team is the one which accumulates the highest number of points.

Zeeshan rides locally with the Punjab Lancers, a Birmingham team created by his dad and his friends.

If you want to see the sport live there is a show in Birmingham’s Ward End Park on July 22.

The sport attracts big crowds in the UK and Zeeshan had the chance to perform before 12,000 spectators last year.

Tentpegging is said to date back 2,500 years with today’s sport being an adaptation of traditional skills developed by Asian armies who relied on their skill with the lance to defeat their enemies.

It is said to be “the ultimate test of horsemanship, requiring determination, hand-eye coordination, discipline and a fearless love of speed”.