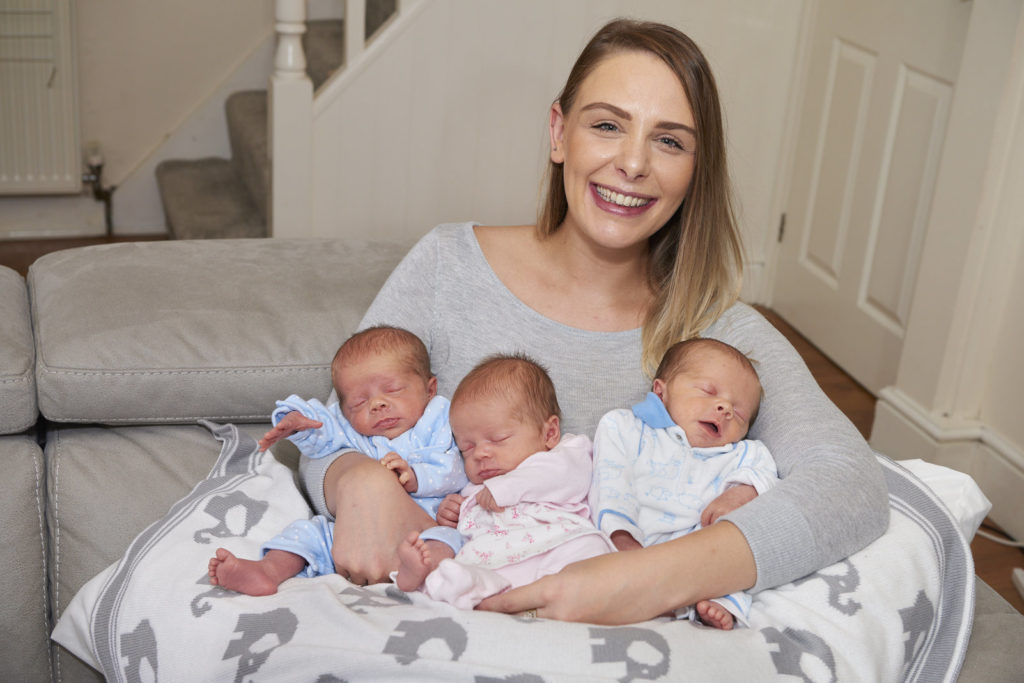 Laura Smith gave birth to the first set of triplets at Good Hope Hospital in over five years during August. Harry, Carter and Aria were born safely to proud parents Laura and Anthony after an eventful pregnancy.

They were born just five weeks early and proved to be strong, if small, spending just 13 days on neonatal care before being discharged home.

Laura, a 27-year-old estate agency manager, discovered that she was pregnant in January and the test said that she was 12 weeks pregnant. The excited couple booked a private scan for a few weeks later, when it revealed there was nothing in her womb. They advised her to come back in a few weeks, as it might still be too early to show up in a scan. The later one revealed three dots, suspected triplets – which the couple thought must have been a mistake. Her first hospital appointment a few weeks later at Heartlands Hospital confirmed that Laura was indeed carrying triplets and they were around four to five weeks into the pregnancy. The false 12 week reading on the pregnancy test was likely to have been caused by pregnancy hormones.

Because triplets are classified as high risk, Laura was seen every two weeks at the hospital from 13 weeks for scans, blood pressure tests, and the babies were regularly checked to ensure they were growing and remained healthy. They discovered that the boys were identical twins, sharing a sac, and their little girl was in a separate sac. Once she entered the final trimester of her pregnancy, the checks became weekly.

Laura said: “The babies were a complete surprise! When the Heartlands doctor confirmed that it was triplets, we couldn’t believe it. From then on, it was a whirlwind of appointments to make sure the babies were OK. It was a tough pregnancy, my blood pressure was regularly high and sometimes too low, I had heartburn and the babies all took up residence on the right side of my bump, making it difficult for me to get comfortable. Within the first 12 weeks, I had put on two stone and by the time I was ready to give birth, I had gained five and a half stone which meant I couldn’t even get close enough to the sink to wash up!”

At 35 weeks, Laura was concerned as she couldn’t feel the boys moving. When she was hooked up to the fetal monitor, her stomach started to tighten and the team feared that she was going into labour. Because they would need to have three neonatal care beds together, the decision was made to move Laura from Heartlands to Good Hope Hospital where she underwent a C-section, welcoming Harry (4lbs 11 oz), Carter (4lbs 1 oz) and Aria (4lbs 7 oz).

Laura said: “When each baby started crying as they came out, it was the best thing I had ever heard. Carrying triplets, I was aware of the risks involved and that they might not cry because they needed help to breathe. There were around 30 staff in the theatre, and there were four medics with each baby straightaway.  They wheeled them past me in resuscitaires with my partner, Anthony, and I was able to see them a few hours later.”

The babies were put on oxygen for a short time and were tube fed and bottle fed, thriving so well that just thirteen days after they were born, they were able to go home.

Laura was discharged after six days and said that leaving Harry, Carter and Aria was heart-breaking, however: “I knew that I was leaving them in excellent hands and the neonatal staff helped make our journey home so much easier. They helped us learn about our babies, even training us on how to use the resuscitaires, and how to tube feed them. We were able to take Carter and Aria home without a tube and Harry only had his in for a day after our return.

The maternity staff across Heartlands and Good Hope were wonderful throughout our pregnancy and after the babies were born. Mr Mike Wyldes specialises in multiple births, which was very reassuring and the neonatal staff have played a huge part in helping get the babies into a routine – something that is very important as there are three of them and they all need feeding every two hours at the moment!

I’m also really grateful to my mum, sister and grandparents – who have been tremendous at helping me with practical thing such as washing, cooking and cleaning (as well as cooing at the babies). It was hard when Anthony went back to work after paternity leave, but we are settling in at home now. The only time the babies have kicked up a fuss so far was when I tried to put them in separate Moses baskets. They were so used to being together in the womb and in their cots in neonatal, that we decided to continue, and they all now sleep in their pods in one cot.”