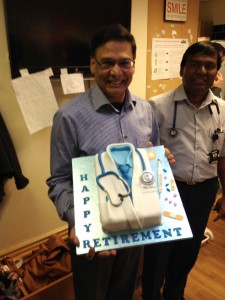 A new granddad who has worked in the NHS for over 40 years as an emergency doctor has been given a fond farewell by his colleagues as he hangs up his stethoscope for the final time.

Dr Kishore Gupta, originally from India, began working in the NHS back in 1974 and after a spell working at Heartlands Hospital, has spent the last 20 years working as a consultant in the Emergency Department at Good Hope Hospital, part of Heart of England NHS Foundation Trust.

The popular father-of-two, who recently became a granddad, was given a rousing send-off by his colleagues who presented him with gifts including a spectacular doctor cake to mark his retirement.

Dr Gupta, 69, from Edgbaston, was joined by his wife Madhu to say his goodbyes and he said he would miss the close-knit team at Good Hope.

He said: “I have had a great time here and made many, many friends. Despite the often intense pressure of the job I have always enjoyed coming to work and always felt the support of my team.

“I’ve have been a consultant on the frontline in the emergency department and have enjoyed the fast pace and having to make quick decisions to help people. After 40 years in the NHS it will take a bit of time to get used to not being there. But I’m a granddad now and my wife has got us going on a cruise so I’m sure I will be kept busy.”

Dr Ola Erinfolami, clinical director of emergency medicine at Heart of England NHS Foundation Trust, was on hand at the farewell to say a few words in tribute to his retiring colleague.

He said: “Kishore has been an extremely respected and much-loved colleague for many years and will be sorely missed within the department and particularly within his team in Minors. I would like to wish him all the best in the future and hope he enjoys a well-deserved and enjoyable retirement.”