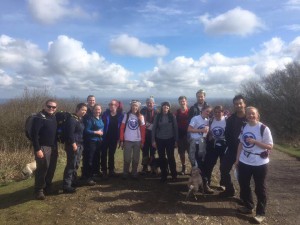 A brave team of ‘Peaky Hikers’ from Heart of England NHS Foundation Trust are dusting off their walking boots and taking on the Three Peaks Challenge on Saturday 2 July.

They will be completing the challenge across three countries in 24 hours, which includes Snowdon, Scafell Pike and Ben Nevis. The three mountains add up to a massive 3,408m climb for the team, nicknamed the ‘Peaky Hikers’.

The 33-strong team is mainly made up of staff from the emergency departments at Good Hope and Heartlands Hospitals, but they’re also being joined by paramedics from West Midlands Ambulance Service and friends and family, who are driving the minibuses.

They have already been on four practice hikes and have plans for more before the event. They’re being sponsored by ADPRAC, a specialist recruitment agency, and their donation has funded the team costs.

Organised by Martin Horton, who works as an advanced emergency department practitioner at both Heartlands and Good Hope Hospitals, the team hope to raise as much money as possible which will be divided between the neonatal and elderly frailty units.

Martin said: “We’re all really excited about taking part in Three Peaks but we know it will be a tough challenge to complete. We wanted to raise money for the neonatal and elderly frailty units because they do a great job of looking after our young and old patients.”