Twelve Days of Christmas – on the third day…

On the third day… 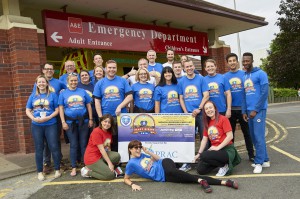 A fundraising event turned into a dramatic mountain rescue for the ‘Peaky Hikers’, a group of our staff taking part in a Three Peaks challenge – raising £3,311.88 for the neonatal and elderly frailty units at Heartlands Hospital.

The team reached the top of Ben Nevis in Scotland, despite the driving wind, cold and rain. On their descent, they came across a group of three walkers, one of which was struggling to walk. The team stopped to help and quickly ascertained that he was hypothermic, so four of the team provided care and took him down from Ben Nevis.

The rest of the team continued, but one of them fell and twisted her knee. After treatment from the medics, she was able to continue. When they were two km from the base of Ben Nevis, another member of the team slipped on a wet rock and smashed her hand. It quickly became apparent that the fall had caused a nasty fracture. Her hand was splinted and pain relief administered.

The team finally reached the base and due to time delays, the decision was taken to go straight to Snowdon. Other members of the team who hadn’t been able to attend the first peak climb, went to Scafell Pike and climbed that, while the remaining team who were able to, climbed Snowdon.

Although the challenge didn’t go according to plan, all three peaks were climbed by members of the team in 24 hours.

Martin Horton, advanced emergency department practitioner at Heartlands and Good Hope Hospitals, organised the expedition and said: “Although we were disappointed not to complete the challenge as a team, we worked really hard together in difficult circumstances and terrible weather. We were able to help out a fellow climber who was very ill and two members of our own team who needed urgent medical attention.”