Twelve Days of Christmas – on the twelfth day…

It’s nearly the end of 2016 and we thought we’d spend the next 12 days sharing some stories and successes from the last year from across the Trust, as well as some useful tips to stay healthy in 2017.

On the twelfth day… 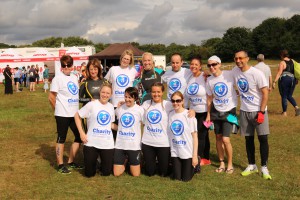 A team of 12 members of the oncology team at Good Hope Hospital raised over £5,500 to help fund improvements to their day unit by taking on a triathlon challenge.

Three teams of four swam, cycled and ran as they completed the City of Birmingham Triathlon at Sutton Park and there was even an unexpected prize for one of the teams who won the female Olympic relay prize.

All the staff, most of whom had never taken on such an event before, had begun their training months prior to the big day as they set about the challenge of tackling the 1,500m open water swimming, 40k cycling and 10k running disciplines.

Clinical nurse specialist Rachel Powell, organiser and part of the prize-winning female Olympic relay team, told news@ the day had been a great success and they were ‘thrilled’ with how much money they had raised.

She said: “Everyone really embraced it and it was such a good day. I managed to hold it together the whole day but when I realised how much we had raised I burst into tears. We had so much support on the day from patients and our families, as well as staff who weren’t actually on the teams, which gave us all a real boost around the course.

“It was a really great teambuilding exercise as well as it really help us bond and lots of relationships were formed from it. I’m so proud and we are planning to do it again next year, with a few of us looking to take on the full triathlon.”

The plan is to use the money raised to create a more pleasant environment for patients with a cancer diagnosis while they wait to see an oncologist/haematologist or to have treatment in the day unit, based in the Sheldon Unit at Good Hope.

Rachel added: “Now we have raised well over our target it has given us more opportunities. We want a nice new sofa and a bit of a revamp for the quiet room where patients can break from the hustle and bustle of a very busy Chemotherapy Day Unit.

“We can also make improvements to the individual clinic rooms. We are a close team and care deeply for our patients as they are a great bunch so we just want to give something back.”