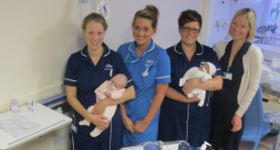 Five members of staff at Heartlands Hospital are swapping uniforms for sports gear as they run for the Hospital’s poorly babies. The staff, who include four nurses and a consultant, are taking part in the Bupa Great Birmingham Run on the 20 October and hope to raise £3,000 for the Neonatal Unit at the Hospital. […]

The bereavement services team at Heartlands Hospital has been nominated in the category of ‘Best Hospital Care’ at the 2013 Butterfly Awards. Taking place 19 October 2013 at the Paragon Hotel in Birmingham, the annual Butterfly Awards celebrate and recognise the achievements of families overcoming the loss of a baby and the healthcare professionals that […] 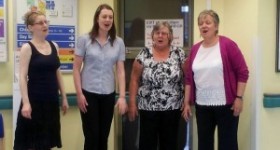 Heart of England NHS Foundation Trust has launched Twilight Sessions, a late-night music programme showcasing the talents of local vocalists, bands and musicians at Heartlands Hospital, Solihull Hospital and Good Hope Hospital in Sutton Coldfield. Scheduled to take place once a month at one of the three sites, the Twilight Sessions will enable a greater […]

Big steps are being taken for good causes as Heartlands Hospital hosts its annual charity sponsored walk and is inviting members of the public to sign up. The 6.5 mile scenic walk starts at Heartlands Hospital, follows the canal and finishes at Solihull Hospital. Last year, the event, which was organised by the Hospital’s official […]

Doctors and nurses pull on their kits for charity fun day

Doctors and nurses at Heartlands Hospital will be getting their kit on for a special football tournament and charity fun day next week. The fun day, which is open to members of the public and is being organised by the Hospital’s ward 19, will feature a face painter, bouncy castle, raffle, barbeque and bar. Kathy […]

Experts from Birmingham Heartlands Hospital hosted a team of leading medics from Xinjiang Medical University in China, in a one-off visit to the Hospital’s Diabetes Centre and MIDRU research team this week. Based at Heartlands, the leading research active centre is one of the largest in the UK, with the diabetic unit seeing and treating […]

Published on 7 Feb 2013 Dr Mark Newbold, chief executive of Heart of England NHS Foundation Trust and chair of the NHS Confederation’s Hospitals Forum gives his response to the Francis Report.

Medics at Heartlands Hospital are raising awareness of disorders in which part of the body’s immune system does not function properly.during world primary immunodeficiency week on 22 – 29 April. As many as one in 500 people may have an immune deficiency, and many can be unaware that symptoms such as frequent or severe infections […]

Free event for locals to mark

Locals are invited to enjoy a series of music events taking place in the heart of the city to mark this year’s World Tuberculosis (TB) Day on Sunday 24 March. With more than 500 active cases diagnosed in Birmingham in the last year alone; the free welcome to Birmingham project event supported by Heartlands Hospital, […]

Heartlands Hospital is holding a special celebration to mark the 5th birthday of its charitable fund, Newborns in Need, which has raised over £150,000 for the neonatal unit. Mums and babies both past present are invited to celebrate the occasion which will feature a large birthday cake and some fantastic raffle prizes to help raise […]